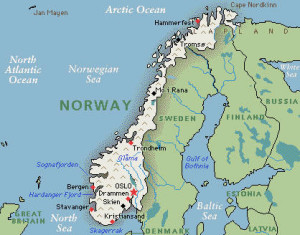 Do you have debts in Norway that you are unable to pay? If so you could consider declaring yourself bankrupt in England, but to do this you must reside in England or Wales at the time of the bankruptcy and you must have lived at that English or Welsh address for a certain amount of time.

If you have debts in Norway it can be very hard to find a good solution to deal with these debts. The system for bankruptcy in Norway is very complex and in many ways much more involved than being declared bankrupt in England. In an English insolvency the bankruptcy period will last for 12 months before you are discharged, although the Official Receiver in England is able to extend the bankruptcy if they feel the person has been reckless in any way.

While you live in the UK or in a European member state you are protected from any creditor that is included within the bankruptcy petition, but depending on the Country that the debt originated in there is a question over whether the debt is considered written off; this is due to the differences in bankruptcy and insolvency law between different Countries.

Is an English Bankruptcy recognised in Norway?

Any debts from any Country around the World can be included within a person’s bankruptcy in the UK. The question is whether the particular Country recognises the option of bankruptcy and if there are laws of agreement between the Country and the United Kingdom.

For instance if a person has a debt from Dubai in the United Arab Emirates it can be listed and included with a bankruptcy in England and Wales. When the creditor in Dubai is contacted they may not agree that the debt has been written off as Dubai does not recognise personal bankruptcy or insolvency.

So what is the case with Norway and Norwegian debts in an English Bankruptcy?

The situation with cross-border insolvency and European bankruptcy law is quite complicated and much will depend on the Country that the person is dealing with. If a person lives in a member state of the European Union there is an EC Regulation that applies to bankruptcy; in simple terms the European Member States will recognise the bankruptcy and that it covers and deals with any debts; whether the debt is an English debt or a European debt such as a debt in Germany or France.

As Norway is not a member state of Europe it can be argued that the Norwegian debt has not been cleared by using the solution of declaring bankruptcy in England, although Norway will recognise Civil Law Judgements from the United Kingdom. A clear definition has not really been made at this stage however, as a bankruptcy Company that deals with worldwide bankruptcy cases we have assisted people with Norwegian debt to file bankruptcy in England and as such will provide updates in regards to this situation once the Norwegian creditors respond to a recent case that we have been involved with.

Case Study – Declaring bankruptcy in England with debt in Norway

Recently we assisted two individual clients to file bankruptcy in the English County Court system. Our clients had only Norwegian debts and no debts within England or Wales.

The basis of the bankruptcy was that both clients had moved to England on a permanent basis and had lived and worked within the area of the County Court. Once a person has lived at their English or Welsh address for a specific amount of time, this changes the person’s Centre of Main Interest (or COMI) from their previous address to the address in England or Wales. This then allows the person to file bankruptcy using English Insolvency Law in their local County Court.

As we support our clients through their bankruptcy period we will update this information as these particular cases progress, especially with reference to the stance of the Norwegian creditors in relation to recognition of the UK bankruptcy.

If you would like some advice in relation to filing bankruptcy in England or from overseas please contact us by using our short enquiry form. We will then email you to arrange a convenient time to speak and discuss your questions.